Continuing our translation of Puyo’s guide to calling tiles, we move on to part 7.

This article will talk about something that new players often do: calling kan

New players love to kan. As long as they have 4 of the same tile, then they have to kan. But for strong players, on houou tables, the kan frequency is less than 5%.

There are of course advantages to calling kan, the biggest of which is that it increases the fu of your hand (a terminal/honor ankan is pretty much the same as 1 additional han). And you can also benefit from kan dora to increase your hand value a lot.

But because there are many disadvantages to calling kan, we should call kan sparingly. Below are some examples of when not to call kan.

1. Calling daiminkan with a closed hand

This is the simplest example:

If the player opposite discards

, experienced players would definitely not kan here. Since you have a closed hand, you would give up the chance of riichi. It’s true that you have a chance of getting kandora 4, but this chance is only 1 in 34, and not at all worth it compared to the value of having a closed hand.

2. When your hand has a low chance of winning

We all know daiminkan is problematic, what about ankan then?

As there are four

in the hand, newbies will often kan without a second thought. This is a major error. All of the advantages to calling kan that we mentioned earlier in this article only apply if you manage to win the hand. In other words, if your hand isn’t going to win, all the advantages of kan just go to your opponents. With this hand, you should discard the honors first, and then if there is no advancement you should consider folding without calling kan.

After a ka-kan, people who have declared riichi (or can declare riichi later) will have two more dora chances, while you only get one. As you have a lower chance of being able to use the dora, you must be extra careful of kans if your hand is not closed.

afterwards, a useful tile allowing you to pon

(as long as no one else has declared riichi). Of course in some situations, you would still not want to ka-kan.

A general rule is that when your hand is not yet tenpai or 1-away with good shape, you should not kan.

3. When someone else has declared riichi

As we have just discussed, when someone else has riichi you should usually not kan, because that will give two additional dora opportunities to them if they win.

Of course, there are exceptions such as:

4. When you are leading

When you are leading, the kan-dora will lead to a higher chance that someone else will overtake you with a big hand. On the other hand, if you are way behind, you can aggressively kan, even daiminkan, to increase variance.

This hand should first discard

because it is overlapping. For the pinzu, we can chii

now, but once we kan we cannot do that. In this case we should not kan as it hurts our tile acceptance.

However, if we draw

, we can kan and then riichi.

Another example of a central tile kan: 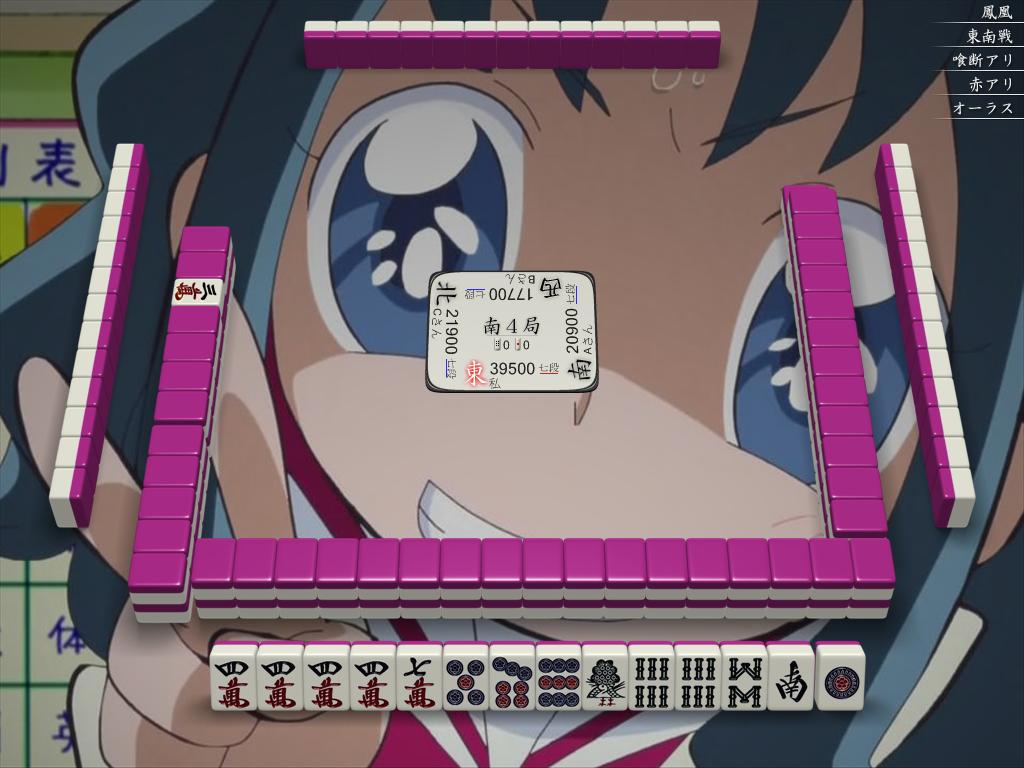 We are dealer in the last round, and we can get 4 dora through kan, but I will definitely not kan here. One reason is that we are leading, but the most important reason is that we have revealed that the dora are gone.

For an opponent to overtake us, they need at least a baiman tsumo, and to get that they would typically need a lot of dora. For example, if opponent has:

should be discarded, but because of the dora

sanshoku, they will instead discard other tiles. This is because they need to get a baiman hand. So their hand will be stuck here and never get

This is the same for other players too. As long as you don’t kan, they will wait around for dora that are impossible to get.

But if I kan, then they will happily discard

and advance their hands, and additionally, there are more dora and kan dora for them to exploit and overtake.

So, in the future, please think before calling kan!