It’s time to dig deeper! This article presumes you’re familiar with the concepts of suji and kabe and the tile safety table found here.

Each of the three numbered suits in mahjong contains six different suji lines – 14, 25, 36, 47, 58 and 69 – making for a total of 18. This means that, for any given tile, there is a base 1/18 chance (or 2/18 for 456 tiles) to deal into a ryanmen, nobetan or similar multisided wait. This probability increases proportionally when other suji lines have been discarded, from 1/18 to 1/17 to 1/16 and so on. In other words, the fewer live suji lines there are, the more dangerous each individual suji line is.

This has a number of implications. If you push against an opponent’s hand, each successive non-suji tile will become more and more dangerous. There may come a point where, even if you pushed a tile at a certain safety rank last turn, you shouldn’t push another tile of the same rank the next turn. Naturally, this turning point depends on the specific circumstances on the table, but Hirasawa Genki gives 12/18 remaining live suji as a baseline for when you should switch to defense.

Now for something a little less intuitive. You know about suji, and you know about kabe, but have you tried using the two together? For example, if someone discards

and you can see all four

becomes safer, as both the

and you can see all four

. Try counting the possible waiting shapes! In this case, ryanmen, kanchan and penchan waits are all impossible., so

becomes as safe as any suji 1 or 9. Similarly, a

When to trust suji

Many people become disillusioned with suji after falling into suji traps. Suji aren’t always reliable, but the timing of an opponent’s discard is usually a very good indicator of whether or not you can trust them.

Suji of the tile that someone declares riichi with, as well as suji of the tile that they last discarded from their hand, decrease in safety by one rank. Suji of tiles discarded earlier than that are generally reliable. This is because the most common form of suji trap arises when one has a double kanchan shape such as 135 or 468, and these shapes are typically kept until tenpai or iishanten.

Outer matagi suji of early discards increase in safety by one rank. For example, if someone discards 8 early, the matagi suji are 69 – the 9 is most likely safe. This is because 788 is a strong shape that can become either a sequence or a triplet, so it’s usually kept as-is until one is close to tenpai.

Also remember to count the other possible waiting shapes. The more tiles you can see in an area, the less likely it is that an opponent is waiting for a tile in that area, and so suji becomes safer.

Even when you’re folding, the order in which you discard safe tiles is important. Safe tiles aren’t equal, so be careful not to just discard them carelessly. You want to be able to continue defending even if other players push. Here’s an example: 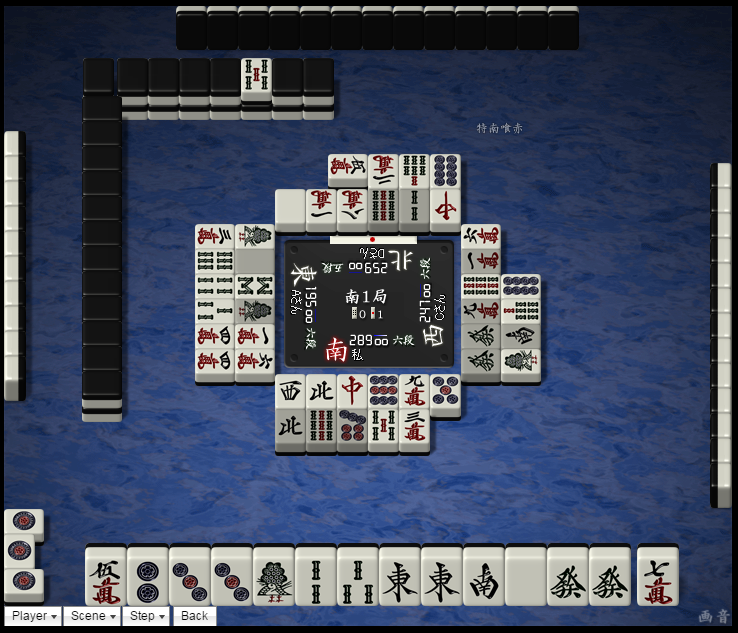 are safe, it’s best to discard

first and keep the other safe tiles in case the other players also decide to attack.

Defense in mahjong is deeper than it appears at first glance. The more you master it, the greater an advantage you’ll have over your opponents, especially when it comes to Tenhou’s ranking system that rewards avoiding last place.