This is an article series aimed at people who are just starting out with learning to play riichi mahjong and are working on how to become strong players – people who have got the hang of the basic rules and the different yaku, and are wondering where to go next to improve. In later articles we’ll cover some of the fundamental aspects of mahjong strategy such as building yaku, tile-efficiency, push/fold judgement and the basics of defending, but for this first article I’ll cover some of the more general themes for how to consider mahjong strategy, and how to work on developing your own skill at the game.

Appreciate the difference between skill and luck

Riichi mahjong is, in the long term, a game of skill. In the short term, however, luck is a significant factor for the outcome of any single hand. This can make learning strategy difficult, as there is a random element that sits between the choices you make, and the outcomes they bring. As you learn the game and think about how you play and the choices you make, it’s important to remember that the end result doesn’t always reflect the quality of the choice you made.Sometimes bad decisions end up getting lucky, and sometimes you make the right choice and it doesn’t pay off. 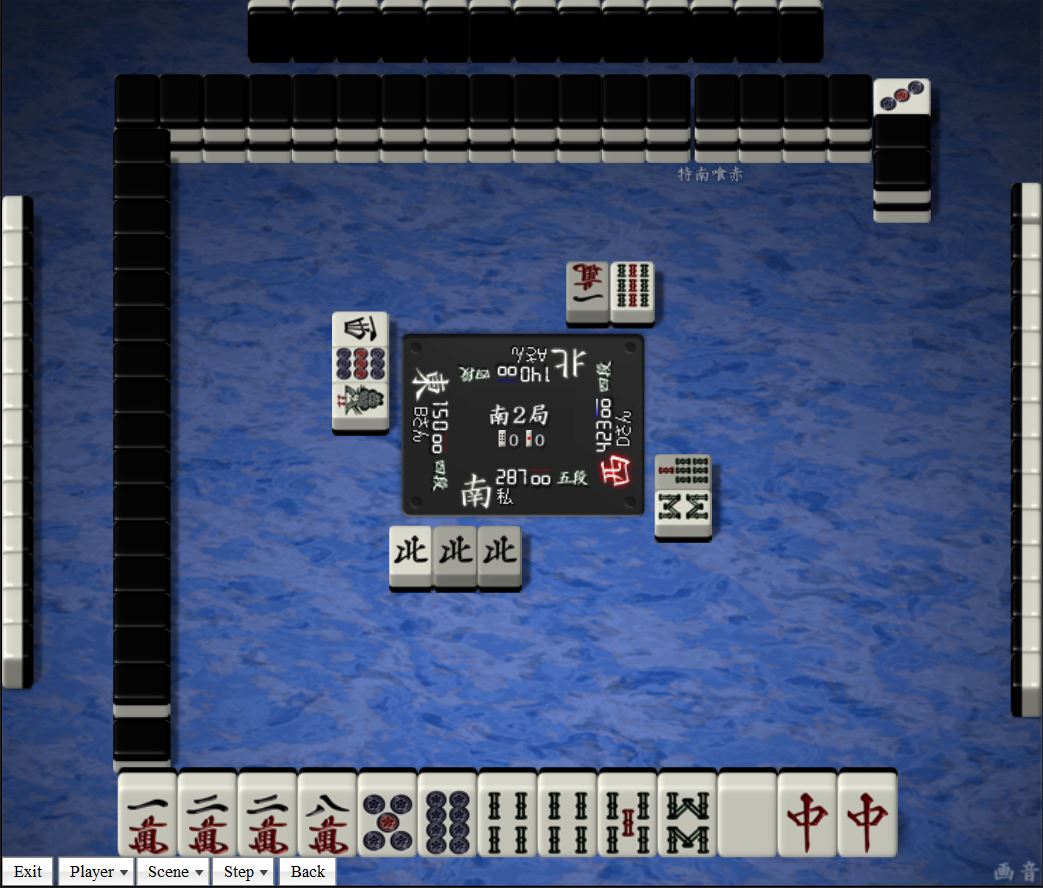 The key thing to remember is that in mahjong we look at trying to make the best decisions over the longer term. Just because in hindsight something didn’t go your way doesn’t mean it wasn’t the correct choice, and that if you’re faced with the same situation again you should do something different – the right choice is what works out the most often, not one specific time.

This goes the other way as well – when things don’t go your way, don’t attribute everything to bad luck. Beginners and low-skilled players can frequently curse their luck for never drawing the right tiles, when as we’ll see in later articles, subtle improvements in tile efficiency can make a huge difference to how many different draws will end up working out for your hand. Sometimes you’ll lose games and it feels like you couldn’t do much about the result, but there’s almost always somewhere you could have improved your play. Psychologically it’s easy to get lured into a sense of feeling that all of our victories are through skill, and all of our losses are down to bad luck – obviously this is rarely true for players, and it’s important to shake off that mentality on the path to learning the game.

Luck is always a factor, but to a large extent in mahjong you create your own ‘luck’ (or lack thereof) through the decisions you make during the game. Mahjong is a game of skill and luck, where most of the skill is built around maximising the chance that you can get lucky.

Mahjong is a game where, most of the time, attack is the best form of defence, as you don’t need to worry about dealing into other people’s hands if you win first. All players have an incentive to win their hand as fast as possible, because (usually) only one player wins each round, and you obviously want that player to be you.

To stop the game just becoming a mad rush to whatever tenpai you can get, riichi mahjong’s scoring system works quite strongly to counteract a pure emphasis on speed, and it does this through a couple of different mechanisms:

The first mechanism is the fact that you need a valid yaku to win – simply rushing to four sets and a pair will typically not allow you to actually win the game.

The second one is that closed hands are typically worth far more han than open hands – a large number of yaku are worth less when open, some don’t count at all, and opening your hand also loses the opportunity to riichi and gain the +1 han and potential bonus han with ippatsu and ura-dora.

The third, and most important mechanism, is that mahjong scoring is roughly exponential between one and four han. A four han hand is worth eight times as much as a one han hand, and because of this it’s important to consider hand value and not just rush to open tanyao or yakuhai every hand. Winning even as many as four or five cheap 1000 point hands in a game is unlikely to win overall, as a single 8000 point mangan from someone else can still overtake you.

As a player you want to win first, but it’s also important to try and win with good hand value – this is where tile efficiency is crucial! Good tile efficiency maximises the amount of tiles you can draw that will advance your hand, allowing you to reach tenpai quickly without having to resort to opening your hand and reducing its value. By playing your own hand well and with strong tile efficiency you can increase the likelihood of being the first player to riichi, meaning that it’s your opponents that need to worry about defending, and not you!

Learn to walk before you try to run

Mahjong is a game that has incredibly deep and complex strategic aspects to it. In particular in manga, anime, and films that portray mahjong, a lot of the focus gets put onto almost supernatural levels of ability (or, in the case of some series, downright supernatural). The reality is that a lot of this is for the dramatisation and to create an exciting narrative, and isn’t at all how mahjong actually works for the majority of people who play it. Things like pinpointing the exact tiles a person is waiting on by reading their discards is reserved for the absolute top level of players (and even then not so much).

Mahjong improvement is about learning the basics, and understanding the general rules of what you *should* do first, before then being able to learn the exceptions to the rules, and how and when to apply them. For any mahjong player, it’s important that they pay attention to strategy that is aimed at their own level of ability. It can be tempting to try and rush to high-level strategic aspects but if you spend time looking at the exceptions before you’ve fully grasped the basics, then it’s not only going to be a slow way to improve, but it can actually make you worse as a player in the short-term.

There are an increasingly large number of English-speaking resources for mahjong strategy; from translated blog pieces (JAJMB), to detailed and thorough eBook guides (Riichi Book 1), to YouTube videos (DdR_dan’s Channel). I thoroughly encourage people looking to improve at mahjong to seek out and absorb whatever strategy information they come across, but it’s vital to be aware of the intended audience skill level, and not to try implementing aspects of strategy that are beyond what you should currently be focused on as a player.

Mahjong is a complicated game and at any level of skill you will find yourself having to try and think about a lot of things at once. A key part of improving at mahjong is practice and playing a large number of games, but this only helps if you’re thinking about what you’re doing. Becoming better at mahjong is about building conscious correct decisions into unconscious and instinctive correct decisions, which allows us to make the right choice more quickly and frees up our mind to think about higher level aspects. We can only do this if we’re thinking enough about our own play to make the correct decisions in the first place – playing games only by gut feel and instinct without much thought is unlikely to change our thought processes about the game strategy, and is unlikely to give much improvement.

Reviewing mahjong problems is a good way to improve our own play. Sometimes during a game we have to make choices where we’re not given enough time to properly review the right answer before we have to discard – going back to these choices in replays and figuring out what the right play would have been is a good way to learn and to give yourself a better chance of being able to make the right choice quickly enough the next time you have a similar problem. Discussing these problems with stronger players is also a great way to develop skill and gain insight about how you should approach the game. There are community chat rooms where players discuss problems and help each other improve, and they’re an incredibly useful way to find out where the gaps in your own game are, because it can often be difficult to see them yourself.

Very few players get good at mahjong without reading guides (you’re reading this, so that’s a good step!), but likewise very few players get good from only reading guides. Putting the theory you read into practice is what matters, and this takes time and repeated reading and effort. It’s very unlikely you can read an article or strategy book once and be able to immediately incorporate everything into your decision-making during games.

The best way to practice, especially starting out, is typically going to be with other people who can show you how to play and discuss where you might be making mistakes. However, for a lot of new players, especially those picking things up online, this isn’t an option. For most brand new players I’d recommend starting out with the GameDesign Flash client until you’re used to the speed, and then move on to online multiplayer platforms like Tenhou. The ability to easily play lots of games each week, and to have replays of your games that you can go back and analyse (and share with other people!) makes online play a really important part of improvement, compared to simply playing a few games every week with a club, assuming that’s even a possibility.

So with those points in mind, this article series is intended to get new players started off and winning games. For new players, the first thing to focus on is hand-building and tile-efficiency, so the next four articles will all be focused on how to build your own hand, because fundamentally it is your *own* hand that wins you points and lets you win games. I’ll then have two articles covering how to defend and when to defend, another article on more advanced efficiency, then a final article on general strategy and things to consider during a game.

For each article I’ll try and highlight the key general principles to take away, which will typically be simple rules of thumb. These rules of thumb won’t always be correct in every situation, but they should be correct often enough that they can be stuck to and help your play. As you improve and learn as a player you’ll start to get the hang of when to bend or break the rules as certain situations call for them.

As a final note for this introductory first article, I’d like to give the clichéd, but still true, golden rule that enjoying yourself is the most important aspect to mahjong. In a four-player game that includes a fair amount of luck, you won’t win every time even with perfect play. And as much as these articles and others like them will encourage you to play in the way that is optimal (on the assumption that you enjoy winning), playing the way you find fun is what matters most. Learning and improving your skill in mahjong is only worthwhile if you enjoy the game and enjoy the time you spend playing it.