Mahjong is a four player game, so it stands that if your opponents are a similar skill to you then you can expect to win around 25% of the time (actually less, if you include draws). In riichi mahjong, when we deal into someone else’s winning hand, we must pay the full amount of points that hand is worth, so dealing in is effectively -1 win. These two aspects combine to make defense a very important part of riichi mahjong, as for the majority of hands we won’t be the winner, and for those hands we want to do our best to make sure we don’t deal in. Without defence, it is a lot easier to lose points in riichi mahjong than it is to gain them!

A key thing to understand about defending in riichi mahjong, is that it is not about trying to guess what tiles someone is waiting on. Reading hands and pinpointing exact waits basically doesn’t exist in real mahjong (as much as anime and manga might imply they’re a huge deal for dramatic effect). Instead, mahjong defence is primarily about trying to discard tiles that they’re probably not waiting on.

But before we get to the ‘probably not’, lets first cover the ‘definitely not’:

If we decide that we are going to fold, then we should do so by discarding the safest tiles first, which would be tiles that we know are absolutely safe. Because of the furiten rule in riichi mahjong, a player cannot win off a tile they have already discarded, or has been discarded after riichi. This means that when defending against an opponent, we should first look to discard tiles that are in their discard pond (or have been discarded by anyone after riichi), as it is impossible for us to deal in with these tiles to that player. Tiles that are completely safe against a player because of the furiten rule are called genbutsu.

Obviously tiles which are genbutsu to one opponent may still be dangerous to other opponents. However, the furiten rule also prevents players from passing on a ron, and then winning before their next draw. Because of this, the tile that has immediately been discarded by the player to your left is always 100% safe against every player (for your current turn only), and in any given situation is the safest tile you can discard.


Identifying and discarding genbutsu is typically relatively easy. However in many situations we will find ourselves without any in our hand which would be 100% safe, and so we need to rely on other techniques to discard tiles that are probably safe. This can be done by looking for suji and blockaded tiles (kabe).

Suji is one of the key defensive principles in mahjong. Suji is a defensive technique that exploits the fact that two-sided waits are very strong in mahjong, and that most tenpai hands will end up with a two-sided wait (especially if our opponent has declared riichi).

The principle of suji is that if a player has discarded a tile, then not only is that tile safe (because it is genbutsu, as covered above), but if they have a ryanmen wait then the tile three tiles over would also be safe, because if player has that wait then they will be in furiten because of the discarded tile.

For example, if a player has discarded

, then if their final waiting shape is either

then they would be in furiten. This means that they also wouldn’t be able to win on

(known as suji tiles) so long as their final wait is a two-sided protorun shape.

There are 6 suji for each suit, giving 18 suji in total:

It is very important to note that while a discarded 4 means that the 1 is relatively safe through suji, a discarded 1 does not mean that a 4 is probably safe, as it may still be a 56 ryanmen wait on a 4. For a 4 to be probably safe, both 1 and 7 need to be discarded. For 1-4-7, 2-5-8 and 3-6-9, the middle tile is only likely to be safe if both of the outer tiles are genbutsu.

Suji is an incredibly powerful defensive tool in mahjong, because of the strong likelihood of a ryanmen wait, however it is not foolproof, and there are a few situations where we should be wary of relying on suji:

1) Suji of the riichi tile. People may hold double closed (ryankan) blocks like

until quite late, and if they reach tenpai they will riichi and most likely discard

. This leaves them with

. Ordinarily, suji would say that

is relatively safe, but in this case it is their winning tile! Because the double closed block is quite common, and often creates this suji-trap wait, be wary of relying on suji from the riichi tile as it is more dangerous than suji earlier in the hand.

2) Suji with very early riichi. Suji relies on the fact that people are likely to build hands that lean towards ryanmen waiting shapes. For riichi in the first three or four discards, the hand has formed very quickly, and the likelihood of the final shape being a ryanmen is lower. Suji can still be used against these hands, however it is less beneficial compared to hands that have declared riichi later.

Finally, it’s important to reiterate that suji is only a defence against a ryanmen wait, and not against any other kind of wait. Suji tiles are, at best, probably safe but cannot be considered as safe as genbutsu. If we are folding, it is best to still choose genbutsu tiles if we have them before resorting to suji.

Another way we can identify tiles that are likely to be safe is by identifying blockades (kabe) within suits of tiles.

For example if we can see all four

tiles in either our own hand, or in the discard ponds, then we know that our opponent cannot possibly have

as their final waiting shape, as these would all require a fifth

that doesn’t exist. This means that

Larger blockades further increase the safety of tiles. For example, if we can see all four

, and three of the

, then the remaining fourth

becomes 100% safe, as there is no possible shape that could be waiting on the last

More often, we cannot see a complete blockade, but instead just three of a type of tile. In these situations for a player to have the ryanmen wait featuring that tile, they must have the last of that type of tile. For the example above, if we can see three

tiles, then our opponent could have a

wait if they have the last

tile. In this case,

In a case where we can see three

becomes double one-chance as a

ryanmen wait would require them to have both of the last of each tile. Double one-chance are still not as safe as no-chance or suji tiles, but have increased safety over non-suji tiles, especially early on.

For all blockades, the tiles increase in safety if the blockade is known only to you (e.g. there is one

in the discard pond, and the remaining three are in your hand). This is because players are more likely to riichi if their wait will appear safe to other players – if they can also see the blockade then they may use it to trick you!

When all else fails

Occasionally we find ourselves in the awkward situation where we have no completely safe tiles, no suji, and no kabe that we can call on. This happens quite often when one of your opponents declares an early riichi, as there will be very few discards to base our defensive plays on. In this situation there are two rules to follow:

The first rule in this instance is the most important, and the one that should be followed first. Honour tiles are typically quite safe to discard if we have no completely safe tiles, as they have lower utility and cannot form any waiting shape based around sequences rather than pairs and triplets. Terminals are also relatively safe (though less safe than honours) for the same reason.

Discarding tiles we have multiple copies of is useful because if the first one passes, the remaining copies in our hand then become furiten tiles and it buys us a few more turns of safe discards, after which hopefully we’ll have more defensive options available to us. However this rule should only be followed after the first rule – if given the choice between discarding an honour tile or a triplet of middle tiles, we should still discard the honour tile first as it will be safer.

We can summarise tile safety in the following chart (courtesy of Daina Chiba’s Riichi Book 1): 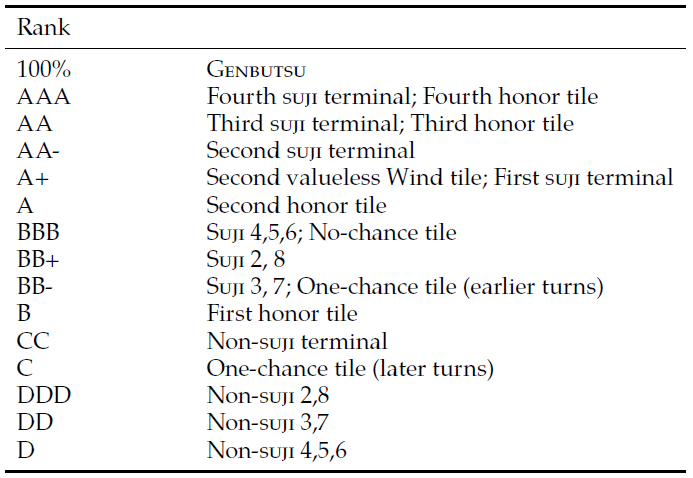 Defence typically involves a lot more active thought than other aspects of mahjong, and it’s worth understanding why tiles are where they are on that chart and making sure the assumption is valid for your case.

For example, the dora tile and tiles around it are likely to be more dangerous (and the hand worth more if you do deal in) than the chart might otherwise suggest, as players are more likely to hold onto those tiles and have waits around them. A second honour tile is rank A and is quite safe early in the hand, however in the last few turns it can be highly dangerous to discard an honour tile if only one is visible to you at that point, as it is unusual late on for them to not already be discarded. If someone is obviously pursuing a honitsu hand, then honour tiles also become significantly more dangerous against them.

And remember that defensive techniques like suji and no-chance aren’t foolproof. The fact that a tile is suji only means it is more safe than a non-suji tile. It is not 100% safe and is not as reliable as discarding genbutsu. For situations where we do not want to deal in, we should always rely on discarding genbutsu and only resort to techniques like suji when we have no completely safe tiles within our hand.

For further reading on defensive techniques, there is Chapter 8 of Riichi Book 1, Puyo’s series on defence, and also Muller’s articles on Defence in Depth, part one and part two.

Now that we’ve covered the basics of how to defend, in the next article we’ll look at push/fold judgement and when we should defend, along with a few examples to apply some of the defensive techniques in this article.