Today we bring you what will hopefully be the first of many Tenhou replay reviews, performed by our expert panel of wonderful volunteers. If you would like feedback on your games, please fill out this form. We welcome replays from players of any level!

This first installment is a review of a replay from a 4d R1814 tokujou player, brought to you by xGeo (6d on Tenhou) with additional commentary by Feng (7d). You can view the replay yourself here. Without further ado, let’s get stuck into it!

The following review was written with the opponents’ hands closed. This review will consist of screenshots from moments I (xGeo) thought were important or have comments on. General comments will follow. 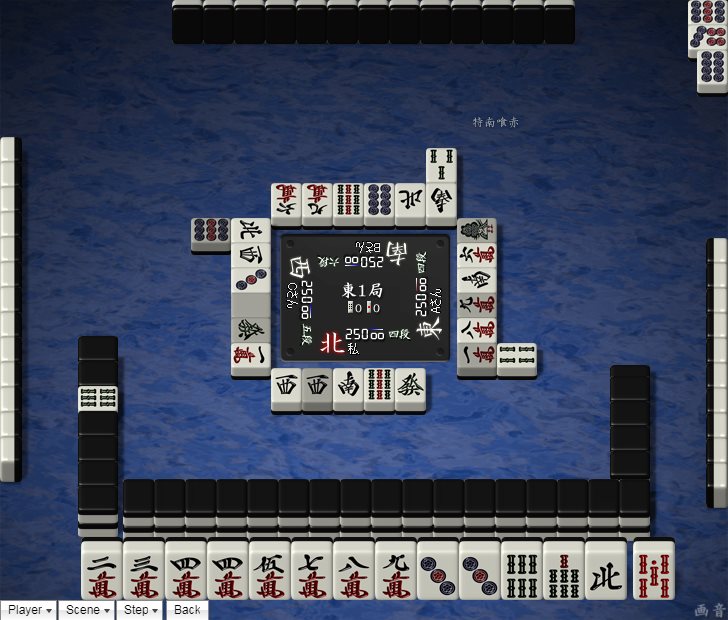 We reach tenpai on the first row for pinfu dora 2. The clear choice is to riichi as the scores are flat, and we are the first to riichi. There is no reason to try to improve the hand as we will have 4 han guaranteed. Damaten here is a mistake. 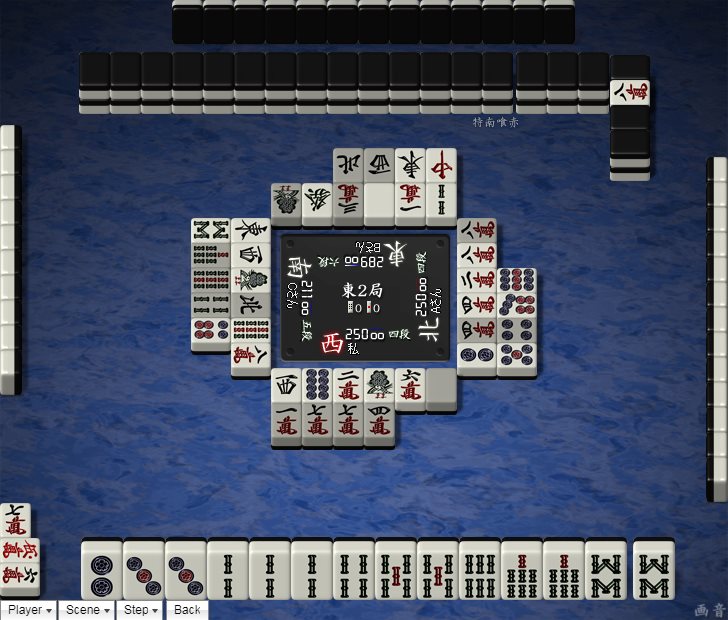 At this point in the game, it is important to consider the opponents’ hands if you try to reach tenpai. It will become difficult to play

later because of South player. Three

are visible so it is unlikely that South will have lower manzu, and his discards indicate he does not need souzu.

are likely waits for South. North player has a clear bias for souzu tiles, so it may be risky to feed him any souzu. This hand may become riichi only, at which point it will not be worth it to push

. In order to make

worth pushing, then pursue chinitsu. 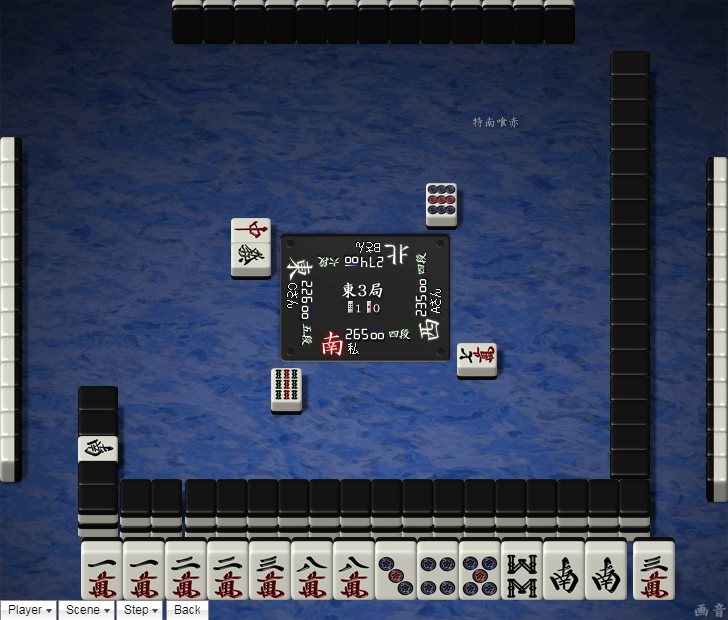 We have tenpai on turn 2 for iipeikou and potentially south. There is no easy way to improve the value of the hand, and scores are relatively flat.

is also likely to be discarded if opponents try to push especially early on. (Early 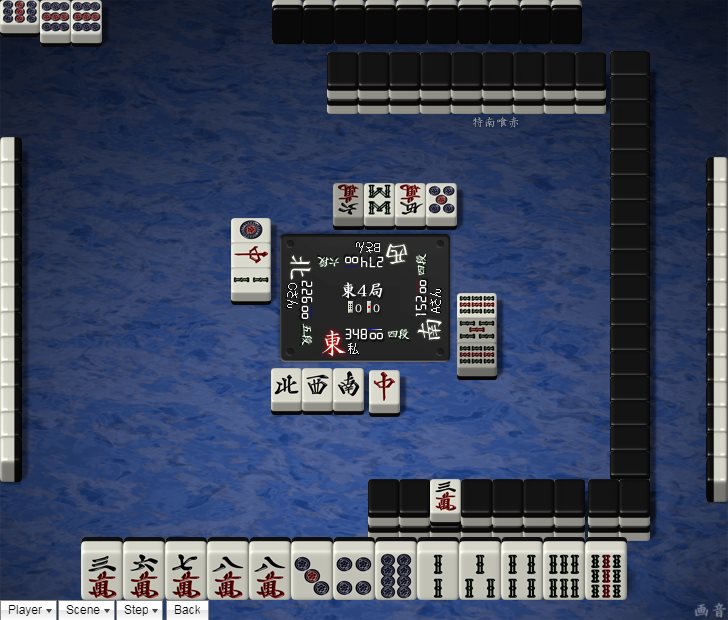 is actually more useful to you than

. Terminal tiles are less useful to you when you have the 4 or 6. Here you have

can be used for both offense and defense because it could become a yakuhai set and is likely to be safe later in the game. 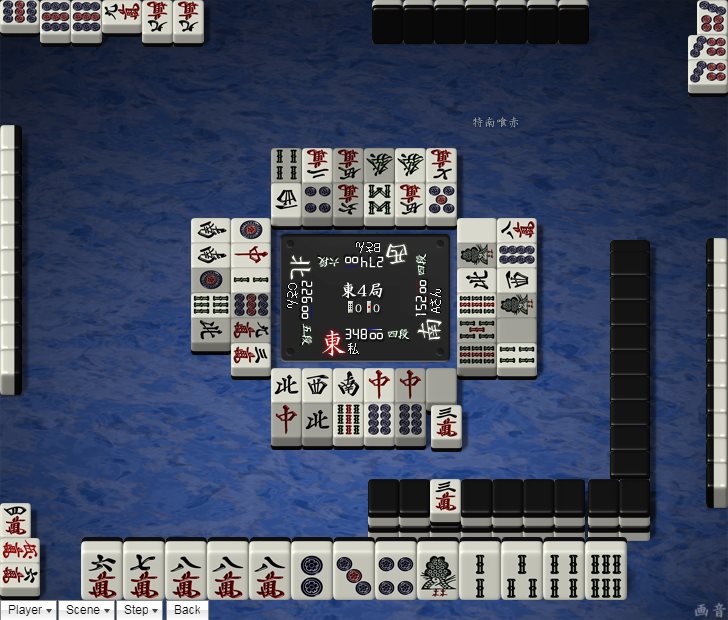 We are dealer with tenpai at the end of the 2nd row for riichi only. It is not necessarily a bad choice to riichi only because we are dealer. However if we choose to not riichi here, then we should not take tenpai. Instead play

discard is also worse in this situation because it is next to the dora. Keeping

gives us the potential to use the dora. In general, sitting on a yakuless tenpai is very risky. 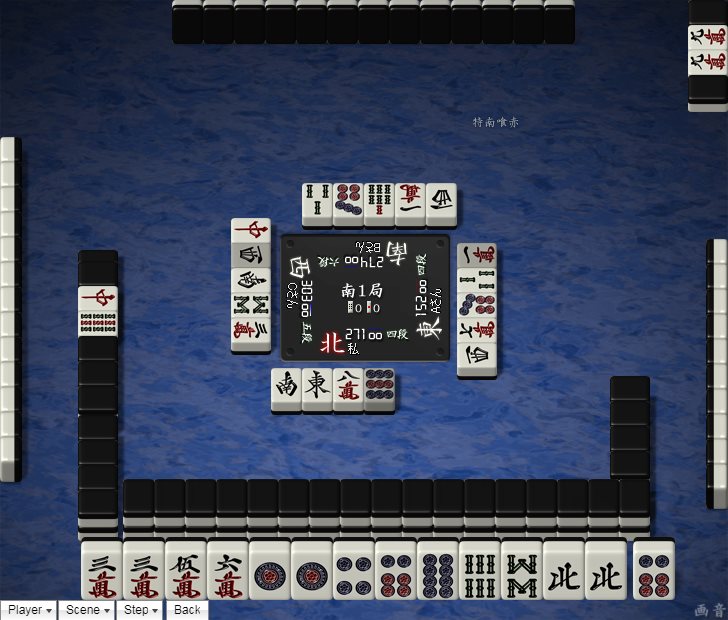 With 4 pairs, we should consider chiitoitsu, especially since two

are discarded. The player chose

which is not very helpful if we decide to go for a normal hand by calling north. I think

keeps options open for both chiitoitsu and a normal hand. 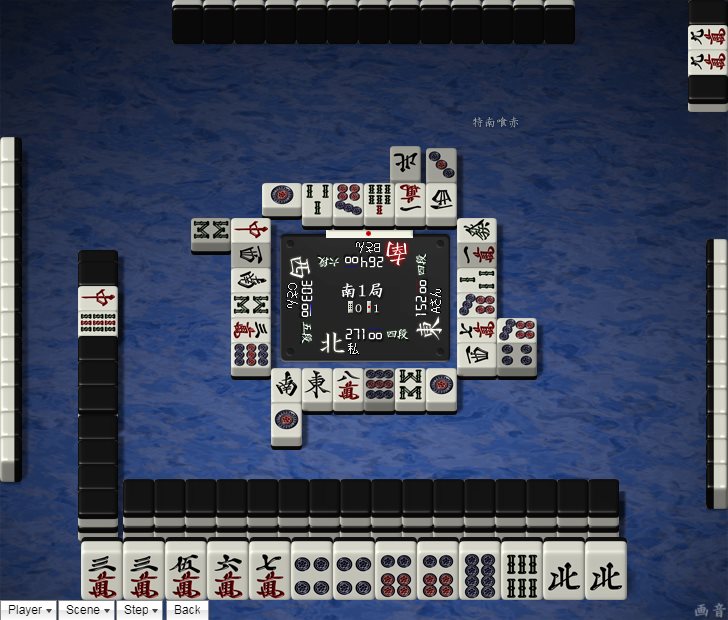 It is not a good move to pon

. It will be very difficult to win the hand because many tiles are already discarded like

. It will require pushing dangerous tiles as well since we will have no safe tiles to fall back on. Also a kan was called which makes pushing against a riichi hand more dangerous. This hand is low value and does not have many tiles left to complete it. Pushing by ponning

is a bad move here. 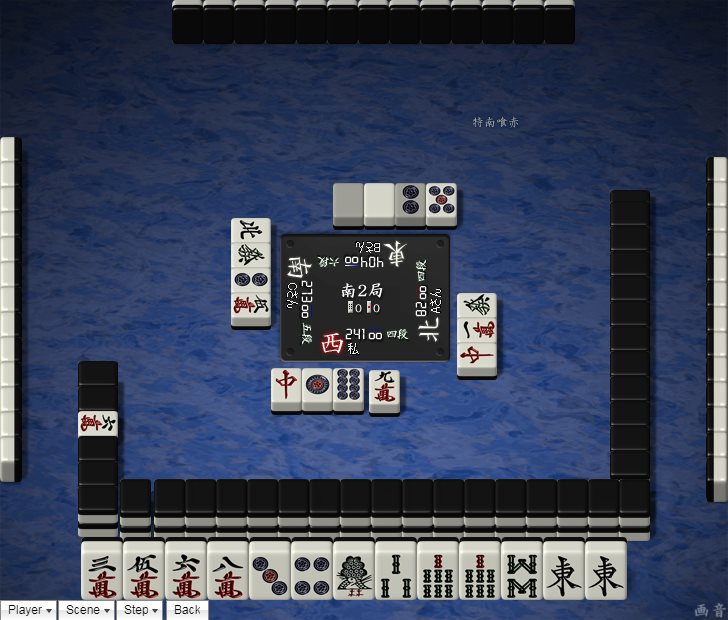 I would consider playing

is likely to become the pair for the hand as getting a triple would be worthless.

triple will not be very valuable either.

is a really awkward shape and requires

to resolve it nicely. However

can also incorporate the dora

while leaving us with a good shape. If we draw

first, then we can discard

. The reason I choose

has more potential to become a ryanmen. 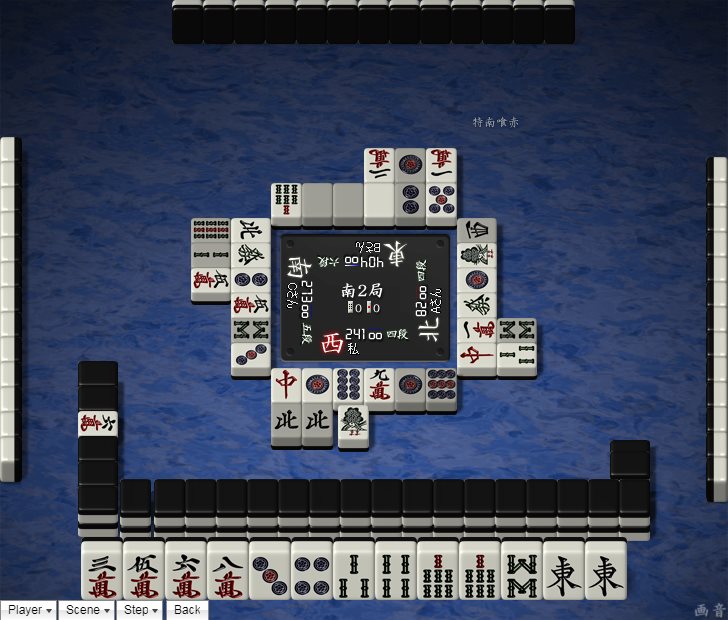 We have just drawn

into a ryanmen. At this point, the shape of our hand is very set. We should now try to discard dangerous tiles, like

, before it is too late.

should be discarded first.

can be kept a little longer due to the 345 sanshoku chance and it’s also one chance. Because four

are visible, the players who have not discarded

are more likely to need it. 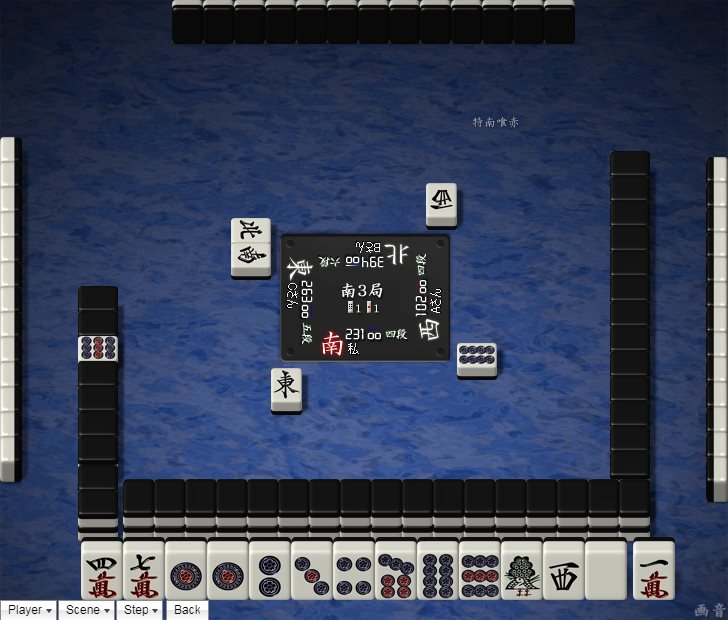 If we are dealt a hand like this, we should keep the option of honitsu available. Start by discarding terminals like

instead of honor tiles. It would not be good to go directly for honitsu by discarding

because we have 2 dora.

is also less useful because we have

. Discarding terminals does not hurt tile efficiency significantly and keeps honitsu as an option at the same time. 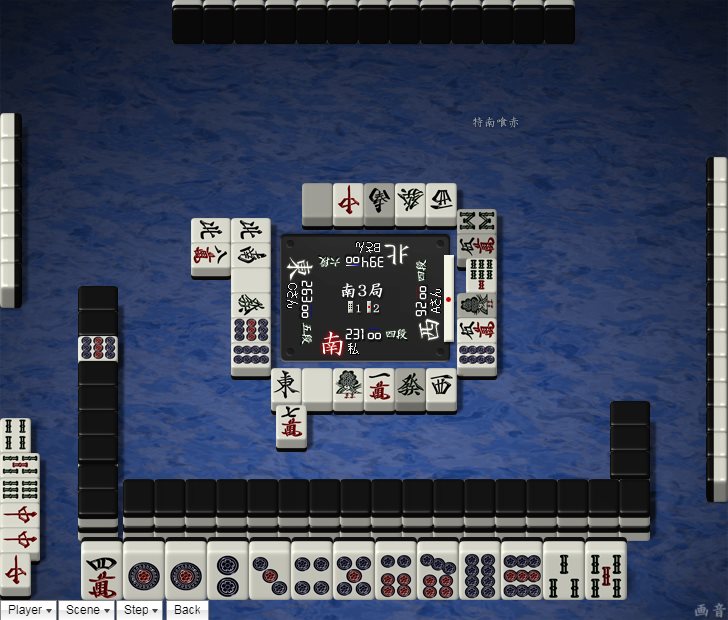 are quite risky for both the riichi and dealer. On Tenhou, I would fold against a last place riichi in South 3 because I do not want to risk dropping to 4th right before the final round. 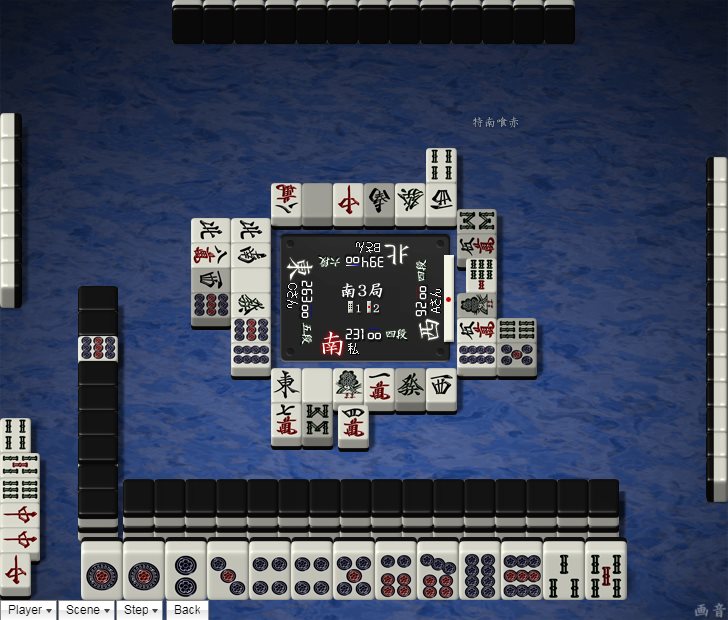 Sitting on a yakuless tenpai is bad. If you’re not going to riichi, play

which is safer because it is suji and give the most improvement options. We have also already discarded

is not a useful draw. This hand could become chinitsu or pinfu dora 2. Again I suggest folding to not risk dealing into 4th place right before South 4. 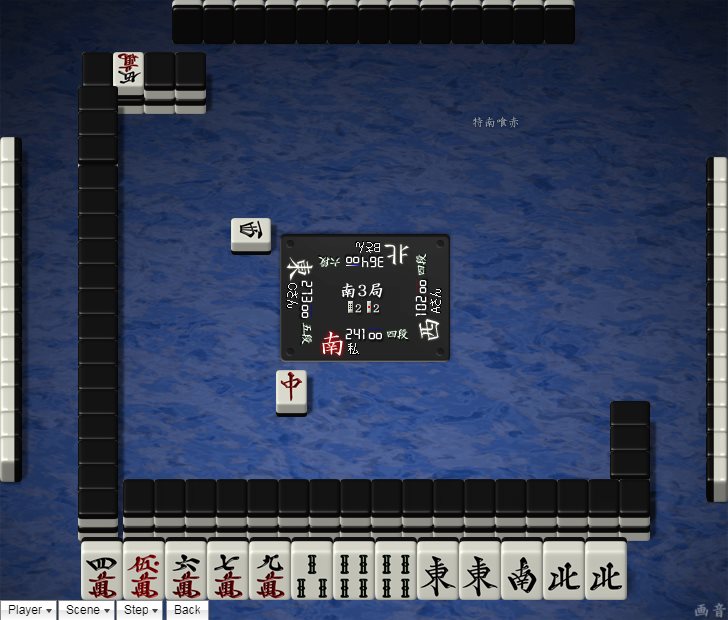 If we have a starting hand like this, we should immediately think of honitsu. Honitsu dora 2 is mangan. Therefore honor tiles are more useful to us, discard

to start. East and north should be easy to call. 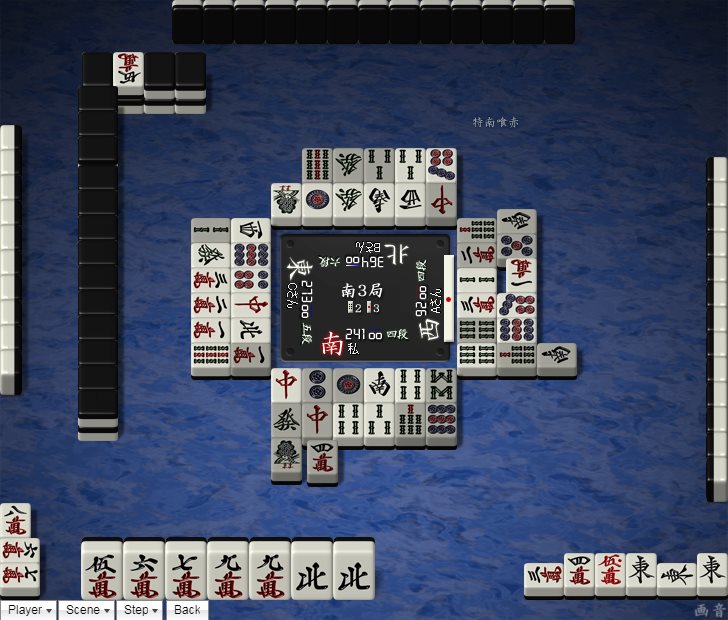 Although you have a 4 han tenpai, it is very risky to push

against 4th place. At higher ranks on Tenhou, I would play north and try to reach tenpai only if it can be done safely. However as a 4th Dan, there is no need to excessively avoid last in pursuit of first. The

is a better discard than

deals in, it is less likely to be mangan because if

deals in, the hand will likely have dora from 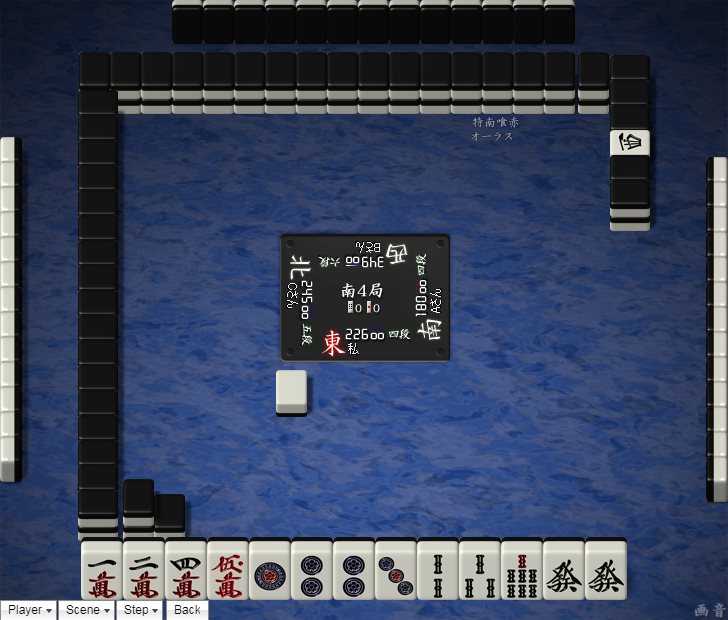 We should consider 123 sanshoku with this hand. Also the hand is quite set already, so you can delay playing yakuhai and discard more dangerous tiles first like

as you most likely will not be using them. I think discarding

is much better than

because if we do not get sanshoku by drawing

could yield another ryanmen. If

becomes a pair, the you can consider ponning yakuhai or going for chanta. The other viable plan for this hand is riichi + dora 1. 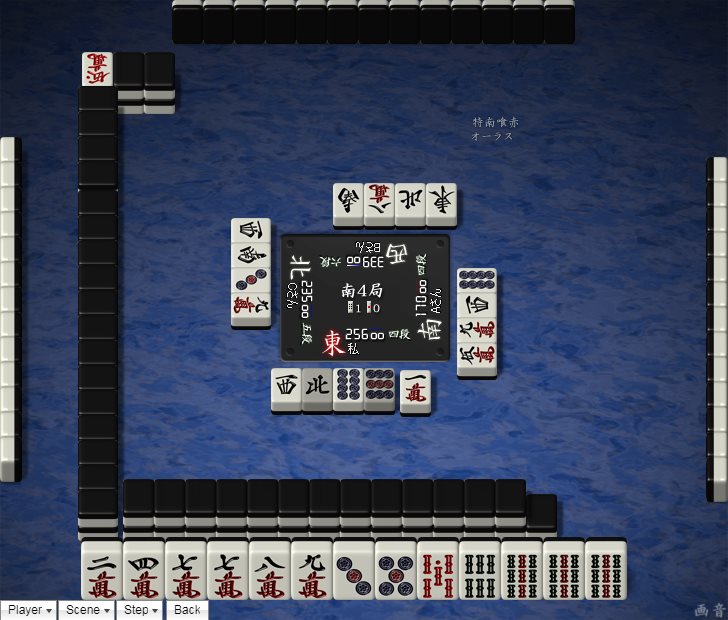 because it may become dangerous later and does not have much backfire. If you draw

, then you can incorporate it in your hand by playing

wait isn’t as desirable because only four

are remaining (and the

is also gone). Since you have a

is less useful. Iipekou is also unlikely because there is only one

Note from Feng: With only a 2.1k gap above 3rd place, you cannot afford to riichi here. Hence, you should force a hand that you can dama with. Just discard

. This goes against tile efficiency but you should always have a plan at the start of your hand. Think about whether you can riichi or whether you have to meld the hand or not. Don’t just blindly move towards tenpai. The plan for this hand is to damaten or remain passive to avoid last. This hand may have a bad shape eventually so proceed with caution. 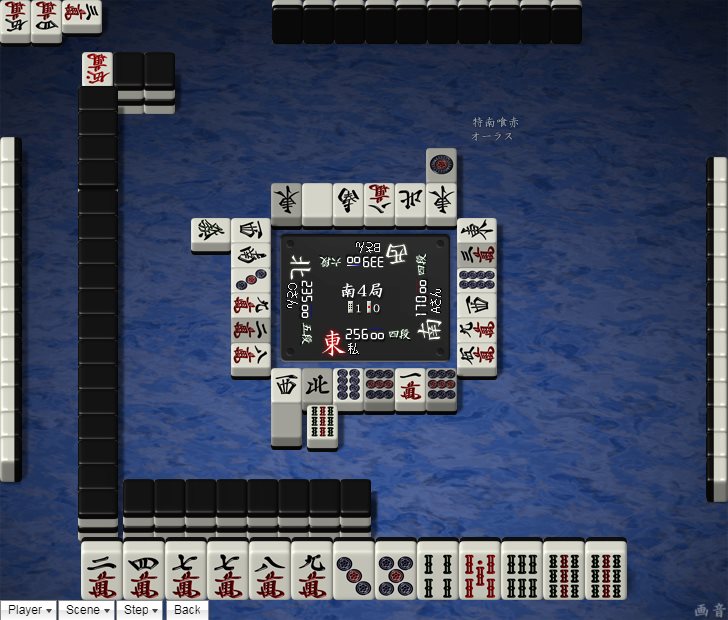 If we have reached this point, we should play the most efficient tile.

is inefficient here. We lose the potential to form a pair with

. We do not have pinfu or a ryanmen final wait guaranteed, so setting your pair is not optimal. As dealer, we should be aiming for a faster hand especially since we have a dora. Riichi + 1han is fine as dealer especially if we can be the first to tenpai. 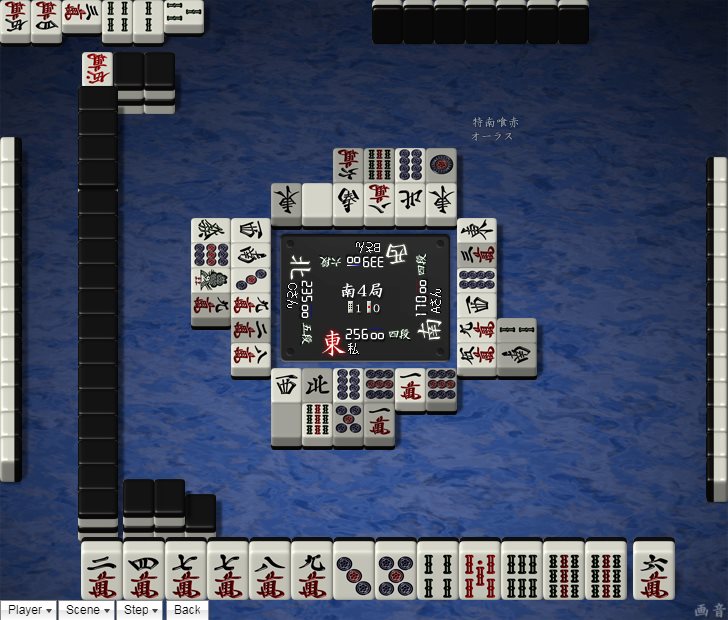 There are only two

left at this point.

is a better wait if you try to push. I would probably play

to be left with ryankan

. At this point, the hand has backfired horribly, and we should not expect much from it. Trying to preserve 2nd place is fine. This hand is unlikely to be won and will most likely require calling for yakuless tenpai in case of a draw game.